characterizes how a liquid

Making sure the viscosity

modifier is used in the

application is for passenger

learn more about the PARATONE® family of products > 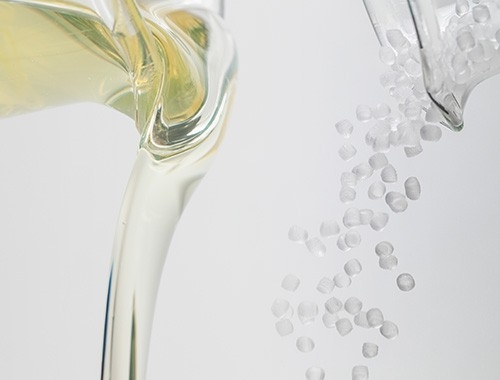 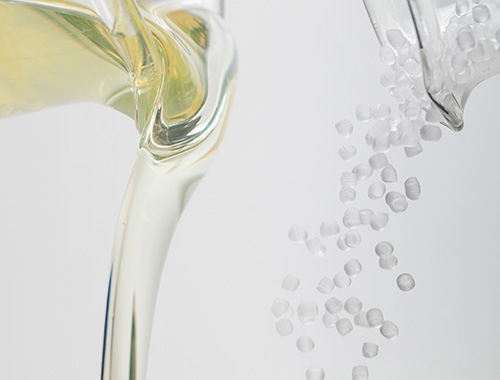 The PARATONE brand is an industry leader in viscosity modifiers with heritage dating back to the 1930s. The PARATONE product history includes the creation of the first olefin copolymer (OCP) viscosity modifier in 1970 and major innovations ever since. Our products are designed to provide robust, low-temperature performance, high-thickening efficiency and extended shear stability.

Oronite supplies more than 20% of the total viscosity modifiers market.

We have nine qualified third-party blenders around the globe, expanding our reliable international supply chain.

Two primary roles of engine oils are to lubricate moving engine parts and reduce the friction and wear of metal surfaces. To perform these functions well, engine oils must exhibit acceptable viscosity characteristics throughout a broad range of engine operating temperatures and shear environments. Lubricants can achieve this by inclusion of viscosity modifiers.

While the science can be complex, viscosity is important because it impacts engine lubricant properties such as oil film thickness (critical for protecting engine parts in high temperature engine environments) and low-temperature pumpability (needed to protect engines during starting in cold climates). The ability to tailor lubricant viscosity is also important in meeting government-mandated fuel economy targets.

Viscosity modifiers are made from polymers, which are long and flexible molecules used in the production of a diverse range of products, including electrical wire coating/insulation, automobile trim, roofing tiles, coatings, paints, rubbers and lubricant additives. When polymer coils interact with oil and each other, they become increasingly resistant to flow, which means we can add them to oils to increase their viscosity.

To make sure the viscosity modifier is used in the most cost-effective way, polymer thickening efficiency (TE) is important. TE describes the boost in kinematic viscosity at 100°C of an oil following the addition of a specific amount of polymer. Oronite calculates a unit-less TE, which ranges from about 0.5 to 4.0. A polymer having a high value of TE indicates that it is a potent thickener.

TE is primarily a function of polymer chemistry and molecular weight. Large molecules are better thickeners than small ones and, at the same molecular weight, some polymer chemistries are better thickeners than others. There is a trade-off, though. While large molecules are good thickeners, they are also more easily broken, which impacts the shear stability of the oil. A viscosity modifier polymer’s shear stability index (SSI) is defined as its resistance to mechanical degradation under shearing stress.

Recognizing that oil viscosity was a critical lubricant performance parameter, in 1911 the Society of Automotive Engineers (SAE) created a graduated system to classify motor oil viscosity in a way that would be easy for the consumer to understand. Today, the SAE International® organization continues to update and maintain the SAE J300 Engine Oil Viscosity Classification system, which identifies – for both hot and cold conditions – specific grades and their associated viscosity limits.

All engine oils must deliver “in-grade” viscosity performance throughout the engine’s operating range. To achieve this, engine oil formulators rely on viscosity modifiers to deliver the required viscosity performance in both low-shear and high-shear environments while exposed to a wide range of lubricant temperatures – very cold to very hot. The automotive industry has adopted several key tests specifically to quantify an engine oil’s performance over a broad range of temperature and shear conditions.

When low shear is encountered at low temperature in the oil sump and lines that carry oil from the sump to the engine, viscosity modifiers must deliver needed viscosity control. Oil that is too thick at these conditions can cause oil starvation.

At low-temperature/high-shear conditions, high shear is encountered in the engine bearings – high viscosities here can result in too much resistance to engine cranking and failure to start the car.

The traditional high-temperature/lowshear measurement is kinematic viscosity at 100°C (kV100C). This defines the oil’s SAE hightemperature grade. Hightemperature, low-shear conditions are seen in leak paths (oil seals, behind piston rings), and a viscosity that is too low can affect oil consumption.

The high-temperature/high-shear (HT/HS) viscosity test which is run using oil heated to 150°C, measures viscosity and indicates the oil film thickness that might be encountered in bearings, cams, etc., under severe high-speed operations. An oil that is too thin under these conditions may not provide the needed lubricant protection, which could result in significant wear in these critical engine parts. 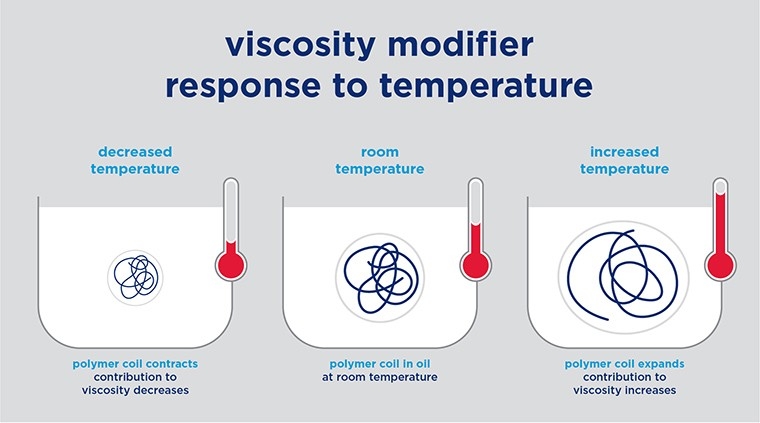 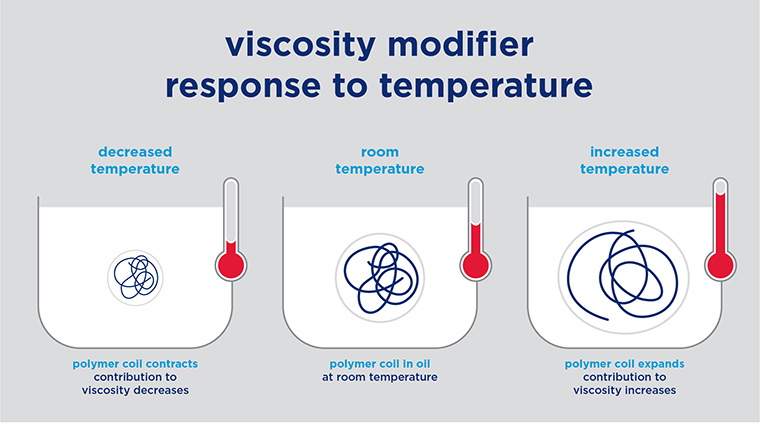 During routine engine operation and through continued use, engine oils are exposed to more extreme shearing mechanisms that break down the polymer molecules, reducing the oils molecular weight. This can lead to viscosity loss and a subsequent decrease in oil film thickness. If too severe, this can cause undesired friction and engine wear with oils that are not formulated with the proper viscosity characteristics.

Under no shear/no flow conditions, the polymer coil is roughly spherical in shape. As the oil begins to flow, the flexible polymer coil reacts to the velocity gradient within the oil. The coil deforms (becomes elongated) and becomes aligned to the direction of flow. The distorted coil impedes the oil’s flow less than the original spherical coil did, and the oil’s observed viscosity falls. This is known as “shear-thinning” behavior. When the shear stress is removed, the distorted coil resumes its original spherical shape and the oil’s viscosity returns to its original value. This shear thinning is therefore termed “temporary viscosity loss.”

In a permanent viscosity loss scenario, the polymer undergoes physical breakage that cannot be reversed when the shear is removed. Consequently, the oil’s viscosity is permanently reduced. The Kurt Orbahn Diesel Injector Test is a frequently used test to quantify permanent shear stability. It measures the permanent reduction in an oil’s viscosity after (commonly) 30 cycles through the test apparatus.

Viscosity modifiers are available across a range of the SSI, and oil formulators choose the appropriate viscosity modifier product that allows them to meet their finished oil performance and marketing needs.

Different lubricant shear rates are commonly encountered in different parts of the engine. The graph below shows how the shear rate can affect the polymer’s viscosity contribution for a typical oil. Both high operating temperatures and high shear rates cause viscosity reduction resulting in reduced oil film thicknesses. Viscosity retention of multi-grade oils in field service is an important performance characteristic since adequate oil film thickness is required for engine wear protection.